Schott Performance Fabric’s leading position in the global textile industry is the result of over 85 years of exploration, entrepreneurship and experience.

The company originated in Akron, Ohio during the Great Depression, when in 1932 Louis J. Schott founded the L.J. Schott Company, focused on sourcing and trading job lots of textile inventory from the city’s mills and rubber companies.

Following the Second World War the business became involved in the army surplus trade, initially in the USA and then, marking its first foray into the international markets, with overseas military depots.

The company’s internationalization took a major step forward throughout the late 1940s and early 1950s when it opened and developed new sources of imported supply for its US-based clients in the form of Japan’s commercial textiles mills, which at that time were playing a key role in the country’s post-war recovery. 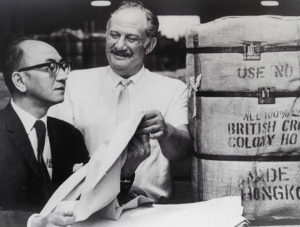 During the 1960s, encouraged by its success in Japan and a desire to expand and diversify its network, the company also established relationships with textile mills in Hong Kong and India, all while continuing to grow its domestic US business in terms of both supply and demand.

When President Nixon normalised relations between the US and China in the early 1970s it was only natural that the business, now trading as Schott International and by then a leading pioneer in the international markets, would be one of the first American textile companies to receive approval to trade with the country.

By the late 1980s the company had become a global expert in sourcing and supplying textiles from all over the world on behalf of its clients, adding such places as Korea, Turkey and Pakistan to its supply network. Around this time, it also began converting fabrics, including proprietary patterns, and by the 1990s and into the early 2000s had leveraged its relationships across Asia to add overseas capabilities for dyeing and printing.

In 2007 Schott Performance Fabrics emerged independently from Schott International, led by Louis’ grandson John, and stands today as a globally pre-eminent textile company with an unparalleled array of deep, long-standing knowledge and relationships across the industry.

Let’s get to know each other better.

READY WHEN YOU ARE

How can we help you?

Stay in the know

This site uses cookies to provide you with a great user experience. By using this site, you accept our use of cookies.OkPrivacy Policy